What shall we make of those pears?

The following is a reflection from David Roquemore on the famous incident in Book II of the stealing of the pears. What do you think? 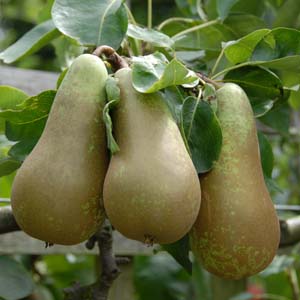 For several chapters of Book II, Augustine talks about his youthful lusts and how his mother warned him not to indulge his sexual appetites. Reading this, you get the sense that he is leading up to some great event, some life-changing moment. Perhaps he will throw himself into debauchery. Perhaps he will violate some innocent maiden. When the great sin is revealed, he has stolen some pears from a tree.  When I read the Confessions in the past, I took this at face value, but this time, I wondered if this were to be taken literally? Is this a metaphor? Is this an allusion to the forbidden fruit of Genesis? For much of the book, it is Augustine’s sexual appetite that is the issue. He is constantly tempted by the “mists of passion.” He famously prays for chastity -- later.  And so I wondered if here he has something in mind that he cannot bring himself to tell. It doesn’t seem likely that he is hiding something, but even so, does the pear incident come to his mind more as a metaphor for the other sins he struggled with than as a turning point in itself?

If it is literal, it seems that in his mind it wasn’t the pears that mattered -- after all, really, the owner of an orchard will not miss them. But that he took them and threw them away, without eating them - this is his sin. He says in chapter VI, “I stole those simply that I might steal, for, having stolen them, I threw them away. My sole gratification in them was my own sin, which I was pleased to enjoy; for, if any one of these pears entered my mouth, the only good flavor it had was my sin in eating it.”  So then, what is it that really bothers Augustine here? It doesn’t seem to be the pears themselves. He understands that stealing them was wrong, and that wasting them added to the wrong. He didn’t take them because he was desperately hungry. He took them for the sheer pleasure of sinning. The issue hovering around all of this seems to be the pleasure he took, and that we all take, in doing what is wrong. It isn’t the pears, or the revelry, or the women; it is the perverse pleasure in sinning that he enjoys. That is the spiritual issue he seeks to confess and analyze.