Did Augustine Have Any Game? 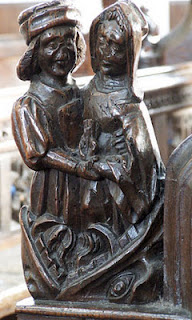 One of the questions raised about the notorious pear theft in Book II of Confessions is why Augustine tells us this seemingly petty story and not a tale of a grander misadventure into debauchery. I'll maintain the argument that this particular story best suits Augustine's purposes in illustrating the nature of sin, but I do want to add one other thought that this question brings to mind.

This question points to our common assumption that there is a more condemning story that Augustine could have told us. We've heard that Augustine was a ladies' man. Why doesn't he tell us a story about stealing some young woman's virtue? While it is admittedly difficult to separate the real Augustine from the legends of his lusty youth, let's look at what Augustine himself shares about this period of his life:


But I was quite reckless; I rushed on headlong in such blindness that when I heard youths of my own age bragging about their immoralities I was ashamed to be less depraved than they. The more disgraceful their deeds, the more credit they claimed; and so I too became as lustful for the plaudits as for the lechery itself. What is more to be reviled than vile debauchery? Afraid of being reviled I grew viler, and when I had no indecent acts to admit that could put me on a level with these abandoned youths, I pretended to obscenities I had not committed, lest I might be thought less courageous for being more innocent, and be accounted cheaper for being more chaste. (from Maria Boulding's translation II.3.7)

I'll not argue that Augustine was some sweet, chaste adolescent, but he does seem to be a young man who talks more game than he plays. He even admits in the above passage that he didn't have any stories comparable to the exploits of the rest of his gang and that he therefore invented tales of lechery so he could win their esteem. If he didn't have any exploits hot enough to impress those rapscallions, then why are we assuming that he is hiding something juicy from us? As it turns out, Augustine is the kind of guy who hears the boys in the locker room and interrupts them with an outlandish story he makes up on the spot about some trip to Vegas with twin lingerie models. Meanwhile, he's really just mama's sweet boy, a brooding philosophical type who thinks more about life than he lives it. There is nothing wrong with that, but it is the sort of situation that makes the night you stole some pears your best story ever.

Look, I'm not pleading Augustine's innocence. It is even possible that Augustine might have such an understanding of the power of lust that he refrains from telling these tales so as not to excite and thereby condemn his reader. I'll concede that. What I want to do though is to call us back to reading Augustine in his own words and not through the lens of his reputation. At least in this instance, he acknowledges that he bragged about more chicks than he bagged.
Posted by Unknown at 10:04 PM